The Lady of Help Sanctuary 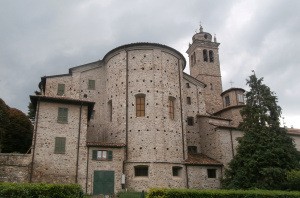 The sanctuary of The Lady of Help was built in the second half of the fifteenth century, beyond the city walls, in the Corgnate area. It was built to contain what was considered to be a miraculous image of the Virgin with Child. The story of the sanctuary began when a farmer decided to paint a fresco that represented the Virgin with Child on the protective wall around his vineyard. Extraordinary events occurred and the fresco attracted many devotees. Among them were the ill, who came to pray and ask for mercy from the Holy Virgin. A small church with a sanctuary was built to protect the miraculous wall with the holy image and to host the pilgrims.

At the beginning of the seventeenth century a new and larger church was built over the older one. On the two sides of the presbytery, down two steps, it is possible to enter the ancient fifteenth century sanctuary where a holy enclosure safeguards the old miraculous fresco. The church lost its ancient unity during the twentieth century when the road to Piacenza was put through the front arcades that joined with the old hospital.