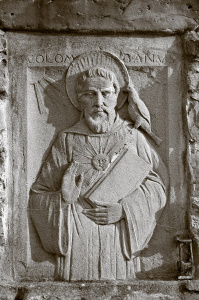 The Irish monk Saint Columban is a central figure in western monasticism. He founded the Columban Rule and many monasteries all over Europe. He is famous for his strictness, asceticism and learning.

Born between 540 and 543, he grew up in a wealthy family and was educated in the liberal arts. At the age of 15, against his mother’s will, he entered religious life and moved to the Clinish Island monastery, Cluane Inis in Gaelic. There he was welcomed by Abbot Sinell and he studied the Holy Scriptures. After his novitiate years Columban took the vows that promised total obedience, chastity and poverty.

At the age of 20 he decided to enter the Bangor monastery, today Ulster, under Abbot Comgall, a very religious monk, who was a severe and strict supporter of asceticism and bodily punishment. In adulthood Columban sought to undertake the ‘peregration pro domino’, an evangelistic mission to spread the Celtic monastic tradition. He, along with twelve other monks from Bangor, left for the continent of Europe which had been lacerated by invasions by barbarian tribes.

He went across England, then into France, where he founded three important monasteries (Annegray, Fontaines, and Luxeuil- where he wrote the Regula) then to Germany, Austria and Switzerland, and arrived finally at Milan, then the capital of the Lombard Kingdom. Having been warmly received by King Agilulfo and his fervently Christian wife Teodolinda, Columban was appointed to engage diplomatically with the Pope so that the Lombard kingdom might be legitimized. In exchange, the king granted Columban the right to establish a new centre of monastic life at Bobbio.

Having arrived in Bobbio by the fall of 614, Columban restored the ancient church of San Pietro. He built an Irish style monastery with simple cells in wood and straw along with a chapel for the faithful and local services. After only one year of residence at Bobbio, Columban died on November 23, 615 at the age of 73. His tomb remains in the crypt of the abbey today along with those of the successor abbots.