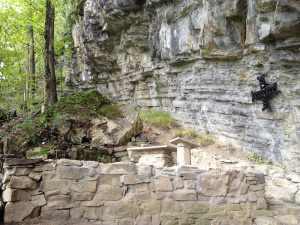 Saint Michael’s Cavern, close to Coli, is a rocky cave where Saint Columban used to retire for prayer and solitude. According to legend, he died there on November 23, 615. It has been a destination for pilgrims since medieval times. Since 2003 it has been officially blessed as a holy place. It can be reached by walking from the square in Coli up to the left bank of the Curiasca. In the surroundings of the cave there are the ruins of two small churches. The old engraved stone cross was moved to the church in Coli along with the wrought iron cross. A copy of the cross is in the retreat.

The area is fenced with local material and the altar’s table and the bookstand are in marble.