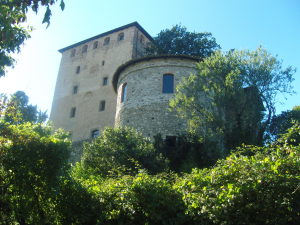 The Malaspina-Dal Verme Castle is located in the upper part of the village in a park of the same name. It is owned by the state and is part of the Association of Castles in the Duchy of Parma and Piacenza.

It was built at the beginning of the fourteenth century by Malaspina, Lord of Bobbio. In 1342 the Visconti of Milan owned it and they passed it to Dal Verme who had ownership through the first half of the eighteenth century. In 1814 the structure was sold to Dalla Cella and the heirs of this family gave it to the state in 1956. Outside of the complex, along the Strada del Roso, there is the old common wash house fed by the Bedo, a stream from the Bobbio River. This was canalized by the monks at the end of the eleventh century when the monastery was located on the lower side of the village. On the left, leaving the Strada del Roso, there are typical medieval homes in Contrada del Castellaro. From here the Abbey can be reached by foot.