THE OLD BRIDGE OR HUNCHBACKED BRIDGE 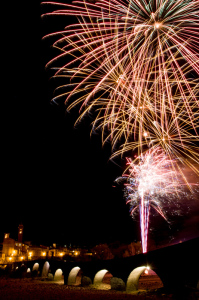 The bridge that acts as a symbol of the city is called the Devil’s or Hunchbacked Bridge because of the irregular shape of the eleven arcades.

A popular legend tells the story of how it came to be built with the different arcades. The Devil asked eleven devils to build it in one night. Each of them was of a different height and so built each arch differently. The Devil was supposed to get the first soul who crossed the finished bridge as agreed with Saint Columban. But the saint cheated the Devil by allowing a dog to be the first to cross the newly built bridge.

The bridge is probably Roman, even though the first news about it dates only to the eleventh century. It has been rebuilt many times because of the many Trebbia River floods.