The current cathedral was built by Benedictine monks between 1456 and 1522 over the ruins of the former ninth century church. The construction of this period covered the mosaic floor which has recently been brought back to light. The façade is a mix of Romanesque, Gothic and Renaissance styles while the rose window is a modern addition. In the central niche there is a statue of Saint Columban placed in 1965 as a substitute for the former statue. This earlier ancient statue is now in the Abbey Museum.

The lower part of the bell tower dates back to the ninth century. The remains of the circular apse are original and still visible at the bottom of the bell tower. Inside, over the main entrance is the motto “terribilis est locus iste” (this is a terrible place) as a warning not to profane such a holy place. 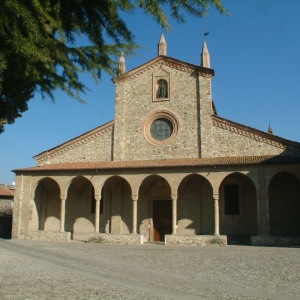 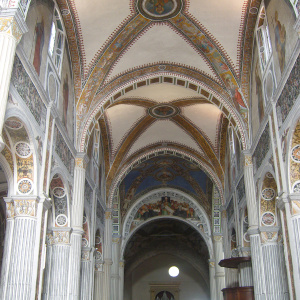 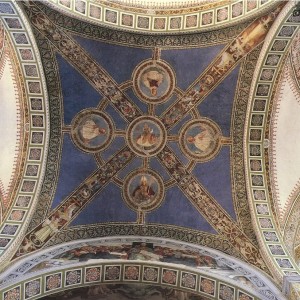 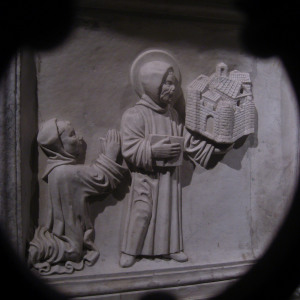 The decoration of the nave dates back to 1526-1530 and was painted by Bernardino Lanzani from San Colombano al Lambro. He also realized the beautiful painting that represents the Virgin with the Child between saints Benedict and Catherine, placed in the left transept.

In the middle of the nave vaults are medallions that represent Saint Mauro, Saint Benedict and Saint Placid. The central vault of the transept is dedicated to Saint Columban and the four monks who travelled with him from Ireland: Saint Suniberto, Saint Cuniberto, Sant’Allo and Saint Valcario.

In the lateral vaults there are medallions for Saint Bertulfo and Saint Attala, Saint Columban’s successors at the monastery in Bobbio. On the half-moon arch of triumph there is Pope Gregorius Magnus approving Saint Benedict’s Rule. The presbytery is decorated with frescoes dated to 1710 by Francesco Natali. In the middle one Saint Columban is brought to glory by angels. And on the two sides are two of his most famous miracles. On the left the monk destroys an amphora, a symbol of heresy to be fought, and on the right is the miracle of the bear subjugated by the ox. In these episodes the Irish monk wears the black Benedictine habit as desired by the Benedictines who commissioned the works.

Two remarkable works are the precious pieces dated to 1488: the wooden choir and the book holder by Domenico da Piacenza.

On the lower level in the crypt there is an exquisite mosaic which was the floor of Agilulphe’s church. This was revealed during restoration of the crypt in 1910. The mosaic is divided into four horizontal stripes. Two represent episodes from the book of Maccabees and the others show the months and zodiac signs. In the crypt itself is the sarcophagus that contains Saint Columban’s body. This work was done by Master Giovanni de Patriarchi da Milano in 1480. On the lateral walls there are the tombs of Saint Attala and Saint Bertulphe.

The wrought-iron gate that dates to the ninth to twelfth centuries is another valuable work. It was originally placed behind the altar to separate the monks from devotees. It is admirable for the so-called ‘devil’s knots’, peculiar double knots that were difficult to fabricate at that time.

The church is open daily.