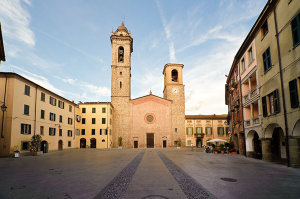 The cathedral is dedicated to Santa Maria Assunta and was built by Bishop Guarinero in 1073. It was the Episcopal seat until 1989 when it was amalgamated with Piacenza and became the Bobbio-Piacenza diocese. The Romanesque style church remained until the thirteenth century. The ceiling was constructed of wooden trusses, both along the nave and the transepts. The windows were narrow and the facade retreated in relation to the two lateral towers. The left tower was the real bell tower and had a three-light window while the right tower was a fortress.

Later on the church structure and the two lateral towers were modified and the facade was totally reconstructed in the fifteenth century. The floor of the square was raised which covered the first meter and a half of the tower bases. The frescoes date to the end of the nineteenth century and were painted by Luigi Morgari. The Byzantine style decorations were done by Aristide Secchi and date to 1896. The presbytery was decorated by the painter Francesco Porro in 1723 with scenes that represent some of the steps in Holy Mary’s Assumption. According to the Lombard taste for optic illusions, Porro painted a whirlwind of clouds and angels extending out of the frame whichcreates a different space from that of the real building. 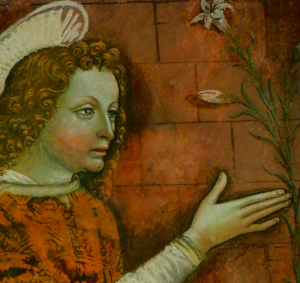 In the minor nave, on the right, close to the presbytery, there is the old Saint John’s chapel. The fresco there was covered by a layer of thick lime for a long time. Restoration in the eighties brought to light a magnificent fifteenth century Annunciation that recalls the Lombard school tradition, mainly of Bramante and Foppa. The painter added the image of a wing which recalls a classical building populated with the heads of Roman emperors and decorated with dancing angels and precious materials.

In the transept two stairs lead down to the crypt which contains the remains of all of the bishops of Bobbio since 1600. The chapel is dedicated to Sant’Antonio Maria Gianelli, bishop from 1838-1846 and founder of the order, the Daughters of Mary of the Garden. Close to the cathedral is the Episcopal palace which dates back to the eleventh century and now hosts the Diocesan Museum.

The exhibit there is comprised of ten halls with works that show the story of Bobbio’s diocese, the Episcopal palace and the Cathedral. The entrance hall tells the story of the diocese through maps, documents and papers that belonged to the last bishop, Monsignor Pietro Zuccarino. The next hall contains a large fresco that represents portraits of the bishops along with their pastoral and Episcopal vestments. In the third hall is the cathedral treasure of wooden, silver and fabric works. The itinerary includes the Fresco Hall (fourth hall) which contains a wall painting that dates to the eighteenth century and represents the Adoration of the Three Wise Men. The fifth hall, the Archive Hall, hosts original wooden furniture and the bishop’s chapel with a work by Domenico Buonviso painted in 1624 (sixth hall). There are also objects of popular faith such as reliquaries (seventh hall) and the last two halls contain diocesan furniture (eighth hall) and paintings (ninth hall). The last hall is dedicated to Sant’ Antonio Maria Gianelli along with his documents and papers (tenth hall).

The cathedral is open daily.